Revenge of the Bat

Weekday evenings in winter are fairly uneventful inside the Weinstein household. I walk in the door after eight hours of work and immediately rip the professional attire off my weary bones in exchange for sweat pants and a t-shirt.

Following dinner, my husband Bob and I head to the Family Room to watch TV while my 18-year old daughter Melissa retires to the living room or her bedroom to tackle the latest senior year home work project.

After a couple hours, Bob tunes the tube to zombie flicks or election coverage (not much difference, I know).  Having no desire to watch either, I typically join Melissa in the living room, becoming one with my computer as Facebook fills the hours 'till bed.

As last Tuesday evening unfolded, our routine bore no difference to every other winter night. By 9 pm, I had digested all I could from my Facebook news feed and decided to head upstairs to read before bed. I stopped into the kitchen where I had a clear view of Bob, sitting comfy on his designated spot on the couch.

Before I had the chance to let him know that he could find me upstairs, my husband let out these now infamous words:

I took only a fracture of a second to realize why he had uttered the expletive. An unidentified creature with wings had taken up residence in the family room, circling and circling in search for blood!

Being the oh so brave, devoted wife that I am...I stayed by my husband's side so that we could tackle this crisis together as a calm, loving couple  I ran like a looney tune to the safety of the upper level of our home, charged into my daughter's bedroom, and slammed the door behind me.

"THERE'S A BAT IN THE HOUSE!" I exclaimed in response to Melissa's befuddled stare.

My thoughts turned to Bob, trapped downstairs with our new house guest. Oh well, logic dictated I must stay in my daughter's room until, um, let's see, the end of time?  Bob and I had enjoyed nearly 22 years together. We had a good run. It had to be this way.

But wait! Another crisis. In my haste to escape the death grip of our flying friend, I HAD LEFT MY PHONE DOWNSTAIRS.  I could let the bat take my husband, but no way would I part with my phone!

But wait! Crisis averted! Melissa had her phone.  My connection to the world had not been severed!

Much to her chagrin, I ripped the phone out of her hands and dialed my darlin', who, fortunately was still alive downstairs.

My "brave" husband cowered by the front door, keeping a sharp eye on the house guest from hell, who had decided to move the party to the kitchen.

This was not the first time the Weinstein family had encountered a noctural terror. A bat had entered our dwelling in the summer of 2002, a story you can read by clicking here.

You would think our previous encounter with bats would have boosted our confidence.

From the safety of Melissa's bedroom, I gave Bob instructions, such as "swat it with a broom".

Only one problem. The broom lived in the pantry, located in the kitchen, which was now under complete control of Mr. Bat.

Time to move onto Plan B.

"Open the front door," I suggested, still giving instruction via phone from my daughter's barricaded bedroom. "Maybe the thing  will fly out."

Bob dutifully obeyed, but our guest had no interest in escaping the Weinstein's hospitality. It flew back into the Family Room and promptly disappeared, perhaps plotting its next move to annihilate our family.

"I don't know where it went," shouted Bob as he creeped into the now bat-free kitchen and finally grabbed onto the broom.  Acting much braver than I felt, I slowly opened Melissa's bedroom door and made my way towards the lower level of the house, stopping halfway down the stairs. I figured it I didn't actually set foot on the lower level, the bat would leave me alone.

Mr. Bat, in the meantime, had resumed flight in the Family Room. Trying to think logically while my husband swatted at the creature (to no avail) with the broom, I called animal control. No luck. They were closed.

At a complete loss, I mentally ran through my options:
1. Attempt to go to sleep and call animal control in the morning, content with the knowledge that a creature from hell had taken over the lower level of my home.
2. Go to a hotel.
3. Burn down the house.
4. Call the police.

The officer who showed up at our front door a few minutes later could not have been nicer. I felt terrible for calling, knowing that surely there were more important things for a police officer to do than help the wacky Weinsteins rid their house of a bat.

He shrugged off our concern, assuring us that bat-calls are a fairly routine occurence for our local police department.

With the calm born out of his training, the officer used a tupperware bowl to gently trap the bat (who now clung to our fireplace) and set it free outside, where it belonged!

As I fell asleep that night, I wondered, did our house guest know about our previous bat adventure that humid summer evening some 14 years ago. Did it know that I killed his cousin with a can of Raid? Had it come back, all these years later, to seek revenge?


If you like my stories, please tell me in the comments section below.

PS - this is my 200th blog post! Thanks to all of you for visiting my blog and reading my stories.
Posted by Lisa Gradess Weinstein at 7:07 PM 4 comments: 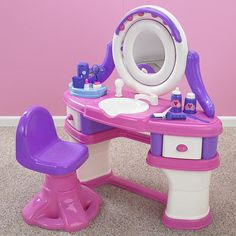 The room had all the makings of a "real" salon.

I donned my best "sophisticated lady" accent, (which sounded like a cross between a southern belle and the queen of England) and waited patiently in the hallway outside of my bedroom the salon until my daughter  the ower told me it was ok for me to come in.

"Oh dahhhlllinnggg, " I drawled when the "salon owner" opened the door.  "I heard you were the absolute best and it was so haaard to get an appointment.  Thank you for seein me on such short notice."

The salon owner giggled, and instructed me to sit in the chair so she could begin the beautification transformation.

"I've been invited to a faaabuuulous, fancy ball this evening and I knew there was only one person who could just make me look absolutely perrrrrfffeccctttt!" I exclaimed.

"Please be quiet ma'am and close your eyes, now this might hurt a little bit," said my little beautician as she tugged through the thousands of knots in my long, perm-induced curls.

Without the benefit of a mirror (what fun would that be) I tried to hold steady as she brushed my hair over my eyes, behind my ears, to the front, to the side, to the back, split down the middle, back over the eyes again, up, and over.  Her little fingers began braiding and twisting and pinning and tugging until I imagined I resembled an alien from outerspace  the most beautiful belle at the ball.

After much concentration and a considerable amount of time, the beautician surveyed her handiwork and nodded an approval.

"May Ah look in the mirror," I timidly asked, only to have my request harshly denied.

"I am not finished yet," admonished the beautician.  "I still need to do the make up."

I stood still once again as my pores took the brunt of 3,000 pounds of perky pink foundation topped off with rosey red blush.  Next came the eye shadow, blues and greens and purples and browns, matched to "perfection" with my olive white complexion.  Imagining I now looked like a circus freak a fashion model, I once again requested a peek in the mirror.

This time, after much serious consideration, the beautician approved my request.

When I saw, first-hand, the extent of my talented beautician's hard work, I burst out laughing and ran down the hall to show my husband Bob how lovely and appealing his wife had now become.

He took one look at me, merely shook his head and uttered these simple words,

Being tortured primped and pampered by my 6-year old?

I don't recall how many visits I made to "Melissa's Beauty Parlor" over the years.  All I know is that the salon has long since closed its doors.

The salon owner exists now only in fond memories, and in its place is a 18-year old who would rather spend hours on her own hair instead of mine.

As I watch her get ready for an evening out, we chat about school, youth group, the upcoming chorus concert, friends, the senior class trip, prom, graduation, college, and of course, boys.   As she skillfully braids the bangs of her long, thick, brown hair, I somehow convince myself that it was all of my visits to her "beauty parlor" that helped shaped  her desire to work hard, be the best, and settle for nothing but perfection.

Melissa's Beauty Parlor may no longer be open for business, but its spirit will live on in the amazing, remarkable young woman that my "little beautician" has become.

*This blog originally appeared in December, 2012. It has been modified slightly from the original version.

If you like my stories please feel free to tell me in the comments section below!
Posted by Lisa Gradess Weinstein at 8:06 PM No comments: