When Your Husband Attempts Vehicular Homicide

My home state of New Jersey is known for its famous seashore, as well as dozens of historic villages that boast tree-lined main streets and small town charm. While state residents flock to the beach during the summer months, it is the autumn season where these quaint small towns come to life. Such was the case when my husband Bob and I took my parents to the northern New Jersey town of Chester, with our two-year old daughter Melissa (now 20) in tow.

We enjoyed a sun-drenched October day exploring Chester's quaint business district, and after a delicious lunch topped off with the requisite scoop of ice cream, we were ready to head back home. Bob took his rightful place behind the wheel, while my father accompanied him in the front passenger seat. I placed our purchases in the trunk, secured Melissa in her car seat, then wedged myself into the middle of the back seat to make room for my mother.

That's when Bob tried to get away with vehicular homicide.

Allow me to explain. As my poor mother attempted to get into the car, Bob attempted to drive away. Seems that he had incorrectly assumed that all members of his cargo were safely seated and secured. Alas, t'was not the case, as Bob soon found out, thanks to the combined ear piercing screams of my mother, father, and me.

He slammed his foot on the brake, and my mother, although a bit shaken, safely climbed into the back seat. As we went on our way, he sheepishly promised to never, ever attempt vehicular homicide again. A promise he kept for 18 years.

Bob, Melissa, and I were heading south on the New Jersey Turnpike, enroute home after a pleasant afternoon with my sister-in-law Kristie and niece Kaeli. As is typically the case with the Weinsteins, we needed to "take care of business" -  so Bob dutifully made a pit stop at one of the Turnpike's crowded rest stops. Only problem, we were held hostage by bone chilling, single digit cold and wind that had gripped the state, and most of the country for that matter, for days.

Bob parked as close as possible, we wrapped ourselves in hats, scarves, and gloves, then braved the elements so we could complete our quest. After we had "taken care of business", my sweet husband wanted to spare his wife and daughter the weather's fury by offering to pull the car up to the front door for us.

Before getting in, Melissa and I decided to switch seats. For the remainder of the journey, she'd take the front passenger side, while I'd settle into the back.

As promised, Bob faithfully positioned our chariot within a stone's throw of where we stood. Melissa jumped into the front as I opened the door to get into the back. But before sitting down, I had to over come one small problem. You see, because of some long-standing medical issues, I use a seat cushion during long car drives. But to my horror, my precious seat cushion still remained in the front.

In his desire to get us out of this predicament as soon as possible, Bob grabbed my cushion and threw it to me. Only problem.....he threw it to the other side of the back seat.

Now imagine if you will, the following scene.

The car door remained open. I still had both feet on the ground as I leaned over to reach across the back seat for my cushion. In the meantime, those impatient drivers began maneuvering their way around our car.

That's when Bob attempted to drive away.

Seems that he had, once again, incorrectly assumed that all members of his cargo were safely seated and secured.

In the next fraction of a second, I mentally gauged my options:
1. Say nothing, and allow the vehicle's forward momentum to force me to tumble onto the hard asphault of the rest stop parking lot, where I would, undoubtedly, be run over by one or all of the impatient drivers lined up behind us.
2. Dive head first into the car.
3. Scream for Bob to stop as if my life depended on it - because it did!

The sound that erupted from my mouth could be heard across the parking lot, into surrounding counties, and throughout the state of New Jersey. Heck, my gutteral scream for mercy could be heard by the astronaunts orbiting the Earth on the international space station. 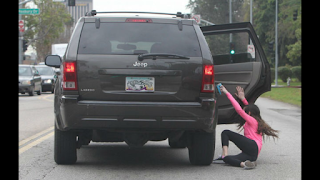 Gradually, my tears gave way to uncontrollable giggles, as I had to admit that I might have over-reacted just a wee bit.

In the meantime, my husband sheepishly promised, once more,  to never, ever attempt vehicular homicide again.

We'll see how long he keeps his promise this time.

If you like my blog, please tell me in the comments section below
If you live in Israel, please email me at prleebee@gmail.com to tell me how you heard about my blog.

Posted by Lisa Gradess Weinstein at 6:09 PM No comments:

I snuggled in my warm bed, my daughter Melissa by my side, as layer upon layer of blankets kept the cold at bay. We turned our focus to the TV, where images of Austria's glorious mountains came slowly into view, and a young Julie Andrews sang out those lyrics made famous in the 5 plus decades since its first airing.

"The hills are alive, with the sound of music".

My husband Bob, given the choice of watching football or the Von Trapp Family's frolicks  for the 574th time, shockingly chose the ball game. But that was fine for my daughter and me! We were comfy, we were cozy, we were singing along.

It would be the first of many movies we would enjoy together during her all too short winter break. The fall semester of her sophomore year at American University had ended, the spring  semester would start soon enough. But during her break, as New Jersey (and most of the country) was caught in the grip of unprecedented cold, we stayed home, snuggled, and turned on the tube.

Most of the movies we had seen before.

Many many times before.

Yet watching them with Melissa felt like welcoming in old friends.

Some, like Frozen were Disney classics, while others, like Will Ferrell's Elf, were a holiday tradition. Some, like Pitch Perfect, I enjoyed for the first time. While others, like Harry Potter and the Deathly Hallows, I have watched every time it airs, since it feeds my obsession with the boy wizard.

It began in January with counting down the months, weeks, days, and hours until Melissa came home for spring break.

Next came the count down until my birthday in April when we visited Washington, DC to see Melissa, our daughter Jessica, son-in-law Brian, and grandson Miles.

Then I started the count down until spring semester ended in May.

Then came summer, and the count downs came to a welcome halt.

But time sure didn't.

Those warm, humid evenings taking neighborhood walks with my girl soon gave way to our new normal with Melissa back in her college dorm.

And the count downs started again.

Count downs until our October visit.

Count downs until the end of the fall semester.

Then my baby came home....and the count downs once again, came to a welcome halt.

But once again, time sure didn't.

I don't want to count down the five days until we pack up the car with what will seem like all of her worldly possessions.

I don't want to count down the five days until we leave her at her college dorm.

I don't want to count down the five days until we return to our new normal. Where Bob watches sports and I cuddle in my bed watching movies.  Without my girl.

But nevertheless, here I go again. Two months, one week, 23 hours until spring break.....when the count downs come to a welcome stop, once again.

If you like my blog, please let me know if the comments section below.

PS - if you live in Israel, please email me at prleebee@gmail.com and tell me how you heard about my blog.

Posted by Lisa Gradess Weinstein at 7:16 PM No comments: