Ask anyone who has ever visited the Build a $5,974 Stuffed Bear Store, and they'll tell you, be prepared to take a second mortgage on your home before your little cherub feasts his or her eyes on the rows and rows of animals just waiting to be "adopted" by a nice family like your's!

Once inside the store, you must DO MUCH MORE than merely stuff your child's chosen Bear.  You also have to purchase clothing for your Bear, lest you bring home a naked Bear and are accused by the Department of Stuffed Bears and Family Services of Bear Abuse.

After your child personally cranks the fluff machine to fill his or her Bear with fluff and stuff, it's onto phase two.  This is the point where sweet, and oh so greedy compassionate sales people show your offspring the wide range of latest Bear fashions so that your new Bear will be, without a doubt, the coolest, most stylish Bear on the Block!

My 15 year old daughter Melissa received her first delightful taste of Build a Stuffed Bear at the age of six while we were vacationing in Disney Land in California. (Who needs Mickey Mouse when you can stuff your own animal?)  Although the store's name suggested it only carries bears, the animal selection extends far beyond the bear genre.  With patience, Melissa examined the thousands of bears and dogs and cats and monkeys and kangaroos and elephants and beavers and snakes lying there, limp on the shelves, just waiting to be stuffed.

My daughter gave her choice careful thought, and finally picked a black and white dog that she happily named Biscuit.  After we purchased the mandatory accessories for Biscuit, he immediately became a part of our family, in more ways than one.  Melissa took him everywhere!  With tender love, our "2nd child" accompanied us on cars, trains, cruise ships, and planes.

Yes, there were many more visits to Build a Stuffed Bear, and animals of all shapes and sizes joined their cousin Biscuit under our roof.  But none of those "inferior" animals were awarded that special place of honor next to Melissa in her bed each night.  No, those less loved stuffed toys ended up ignored, lying in a pile in her toy chest underneath puzzles and blocks and coloring books.

Over the years, grandparents, aunts, uncles, and friends have added to Melissa's stuffed animal collection, but still, none compared to Biscuit!  Finally, as my daughter evolved from an innocent baby into the throes of adolescence, we gathered up the 3,953 stuffed animals that littered every nook and cranny of her bedroom, shoved them into three huge boxes, pushed those boxes down the hall and abandoned stored them in our spare bedroom.

Yes. We abandoned stored every last one of them.  Except Biscuit.

Even though her favorite black and white stuffed pup no longer accompanied us on vacation, he still remained a steady presence on her pillow every night.  A tender reminder of her sweet innocence, and a sign that perhaps I could hold back time.

Recently, as rain pelted the windows, Melissa sat in the hallway while I carried a mop, broom, paper towels, bucket of sudsy water, and plenty of sponges into our spare bedroom. Unfortunately, I had neglected this particular area of our house for years, and had made a vow to finally get in there and tackle nearly a decade's build up of dust and dirt.

Task number one - go through the 3,953 stuffed animals that had been lying there, ignored for years.  I thought that some of them might hold special meaning for Melissa.  So out of courtesy to her, before I simply donated the entire box to charity, I held up each animal, one by one, to see if there were any she wanted to keep.

Melissa smiled as each toy brought back treasured memories of how and when it came into her life. Yet she consented to give the majority of them away, content to let her collection bring happiness to another child who may not be as fortunate.

As I neared the bottom of the box, I picked up a yellow doll called "La La" from the Teletubbies (the worst children's TV show ever created).  We both laughed as we remembered how much she used to sit for hours watching the antics of the dreadful Teletubbies.  Then, after she shook her head to indicate that "La La" was no longer welcome in our home, he joined his animal friends in the hefty bag that would soon make its way to Goodwill.

Suddenly, Melissa and I distinctly heard the sound of "La La" coming from the depths of the bag.


We started at each other in horror!

Did "La La" know we were giving him away?

Could "La La" be possessed?

Would "La La" crawl his way out of the bag in the middle of the night and take out his revenge,  Chucky style, on his former owner and her mother???

So Melissa and I did the only thing we could think of at that moment.

And laughed some more!

Oh well, if "La La" does decide to attack, at least Biscuit will be there to protect my daughter, for Biscuit still holds his place of honor on her pillow.  Somehow, I don't think Melissa will ever part with Biscuit.  For as long as he stays, she holds onto a piece of her early years, and I get to cling to my baby, for just a wee bit longer. 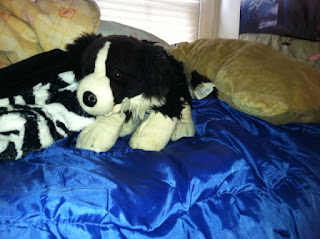 "Biscuit", who came into Melissa's life nearly 10 years
ago, still holds his place of honor on her bed!


I love getting feedback!  If you like my stories, please tell me in the comments section below.
Posted by Lisa Gradess Weinstein at 8:40 AM