My small family reluctantly stumbled out of bed much too early than should be allowed for a Saturday morning.  After listening to our alarm clock force us awake at 6 am every morning of the work week, my husband Bob and I longed to take advantage of the weekend break and cuddle for just a few minutes longer under the cozy, warm covers.

But alas, t'was not meant to be.

Dozens and dozens of teenagers were waiting for my 17- year old daughter Melissa's arrival at their youth group weekend retreat located at an overnight camp roughly an hour and a half away....and mom and dad could not disappoint.

We ran through the house, grabbed our coffee and keys, and gently encouraged Melissa to get it in gear, lest her friends dare start the fun without her.  Before walking out the door Melissa pointed to a sealed envelope sitting suspiciously on top on her computer keyboard.

"You are not to open this until tomorrow morning!" she commanded.

As Mother's Day dawned the next morning, I realized with a twinge of sadness that the people who meant the most to me, the people who had made me a mother, were not there.

Melissa would come home later that day, happy and exhausted from her weekend retreat.

Bob had kissed me goodbye an hour earlier as he put on his "music producer" hat and headed to a studio to put the finishing touches on five beautiful, original songs that Melissa wrote and recorded. He too, would be home later that day.

I knew a call would come soon enough from my step-daughter Jessica and her husband Brian, whose love spanned the three hour distance between us.

Yet, at that moment, in the wee morning hours, my family seemed like worlds away.

I was a mother, alone, on Mother's Day.

Fortuately, I still had the envelope. The suspicious envelope that sat on top of the computer keyboard, waiting to be opened.

I pulled out a greeting card which contained the following instructions, hand written by my daughter.

Step 1: Go to my lap top
Step 2: Open it
Step 3: Located in the middle of the screen is an icon that says "Mother's Day Best Day" Click on it
Step 4: Watch and cry

She should have included "Step 5 - Get Tissues".

The video featured Melissa playing guitar and, with a voice like an angel, performing a cover of  "The Best Day", a heartfelt song written by Taylor Swift as a poignant tribute to her mother.

As my baby girl sang, a photo montage transformed the computer screen into a visual history of my cherub's life journey with mom by her side.


Melissa playing in the snow, bundled so tightly she could barely see.

Melissa dressed as Tigger, experiencing Halloween for the first time.

Melissa and mom splashing in the pool.

My tears came without warning.

Tears for a young lady whose childhood seemed to have slipped through my fingers...despite my monumental efforts to never let go.

Tears for a sweet baby who has evolved before my very eyes into this incredible person who is now in high school, who drives a car, who writes her own music, who volunteers as president of her youth group, who works a part-time job, who spends hours laughing with her friends.

Tears for a beautiful young woman who has less and less time ......for me.

Next year, she will graduate high school and continue on her life journey alone, with mom no longer by her side.

Yet, the time and love she put into the video told me one very important thing.

And I know I always will.

Click the link below to watch Melissa's Mother's Day Video. 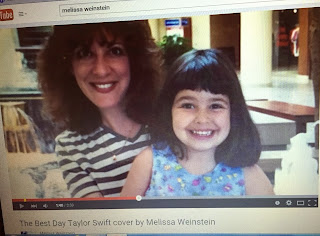 If you like my stories please tell me in the commets section below.
Posted by Lisa Gradess Weinstein at 8:25 AM