"You'll need an MRI," said my doctor in the most nonchalant voice imaginable.

"NO, THAT'S NOT POSSIBLE!" came my panicked reply.

To him, an MRI is no big deal. I'm sure he sends hundreds of patients to their doom to the imaging center for this valuable diagnostic test each year. 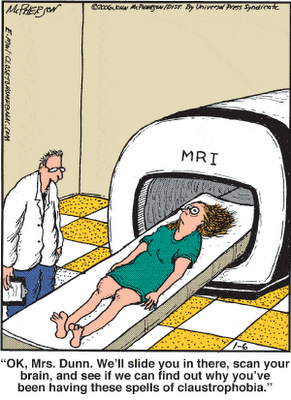 An MRI to me is akin to being buried alive. Trapped forever in an enclosed tunnel with no escape in sight. No, there had to be another way to diagnose the nerve pain that has plagued me on and off for the past decade.

But wait, I've read about these new fangled Open MRI machines that don't require your body to be forced inside a tunnel just big enough for a Barbie doll to lie comfortably. An Open MRI would be so much easier because, well, it's OPEN.

If the  Open MRI means I won't have to suffer through crippling, anxiety-induced claustrophobia, then who cares if the scan does something as insignificant as produce an accurate report?

In fact, who cares if I get diagnosed at all. Sorry to have wasted your time doc. I don't need any tests.

I'll live with the pain.

But then.......... the doctor uttered those magical three words.

Valium, you say? Well perhaps I can consent to forcing my body into a vaccum tube if I can take valium.

Reluctantly, I scheduled the MRI.

On the day of reckoning I enlisted the support of my loving and patient husband Bob to take me to the imaging center, knowing that the valium would render me incapable of driving home

I swallowed the magic pill about 30 minutes prior to the test....and the effects were nearly instantaneous. A warm, comforting wave of oblivion made it's way through my body, settling into the part of the brain that controls claustrophobia (as well as the ability to function - which really didn't matter.)

I handed my insurance card to the friendly lady at the registration desk (or it might have been my credit card, or my library card, or a photo of my daughter - I'm honestly not sure). Then I handed my valuables to Bob and followed the technician  to the back where I entered the.....

The MRI sat there, looking innocent enough. But I knew that its wide, open mouth was just waiting to swallow me alive.

But thanks to the valium, being swallowed alive didn't seem to be such a terrible fate anymore.

The technician had seen cases like mine before. Seems that crippling claustrophobia is not a unique problem. 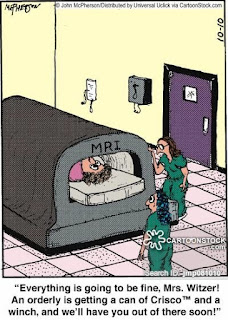 She placed a blindfold over my eyes, shielding my view of the belly of the beast. In addition, ear plugs helped drown out the sound of the machine's terrifying knocks and booms as it digested its latest prey.

Thanks to the valium, the blindfold, and the ear plugs, the 15 minute test seemed to last a mere 30 seconds. When the technician entered the room and pulled me out of the belly of the beast, my foggy brain soon came to the realization.

I bid farewell to the kind technician, then allowed Bob to guide me to the car, drive me home, and put me to bed so that I could sleep off the effects of the valium.

The Monster MRI Machine put up a good fight, but was no match for "Loopy Lisa", who lived to tell the tale.