As the summer of 1975 inched ever closer to September, my parents, brother Steven, sister Bev, and I jammed into the family station wagon and embarked on a three day journey south to that magical place filled with endless wonder....Walt Disney World!    During that first visit, with a ten-year old's eagerness to view the world using nothing but imagination, I fully embraced The Happiest Place on Earth ....and I never let go.

Today, as I unpacked after returning from what was, perhaps, my one millionth visit, I closed my eyes and vividly recalled another little girl, very much like her mother, as she witnessed the magic of Disney for her very first time.

It had been a vacation that almost didn't happen.

Originally booked for May of 2001, my husband Bob's emergency gallbladder surgery forced us to change our plans.   We called the airline and hotel and decided on an arrival date of September 13, 2001, when kids would be back at school and crowds would be minimal.

On September 11, two days prior to leaving, we spared our four-year old daughter Melissa from learning the real reason our trip had been cancelled, told her the pilot had become sick, and grieved with the rest of the nation.

Finally, in January, anxious to escape a brutally cold New Jersey winter, we boarded the plane!

With excitement and anticipation, Bob had set out to guarantee that every moment of Melissa's first visit would be filled with wonder.   That meant ensuring our little princess had the opportunity to meet some "real" princesses like Belle, Ariel, and Cinderella!  Unfortunately, the ever-so-popular Breakfast with the Princesses demanded reservations at least one month in advance, and only a few fortunate souls made the grade.  So, four weeks prior to our departure, Bob awakened as the sun peeked over the horizon, made his way down to the kitchen, dialed Disney reservations on our land line, repeated the same number on his cell, put both phones to each ear, and patiently waited.   His perseverance paid off, as we soon found ourselves seated at a table nestled inside Cinderella's Castle, as the "oh so famous" royalty from Beauty and the Beast and The Little Mermaid fawned over my star-struck offspring.

At 15, Melissa has long ago given up the notion that cartoon characters can come to life.  She has, instead, switched loyalties to the real life performers who sing their hearts out each week, hoping against hope to avoid elimination and become the next American Idol.

Full of musical ability, I believe Melissa sees a part of herself in the dreams of each American Idol contestant.  Therefore it came as no surprise when she announced her desire to perform on The American Idol Experience, a signature attraction at Disney's Hollywood Studios.

Disney invites guests of all musical abilities to audition, and from the hundreds who seek fame and fortune each day, only 15 are actually chosen to appear during one of five daily performances.  The program mimics the weekly TV program, with three performers per show competing for the coveted title, and a live studio audience made up of Disney guests voting to seal their fate.  The winner then gets a front of the line pass to audition for the real American Idol!

Although she has the world's sweetest voice that often moves me to tears, Melissa's performance experience is minimal.  True, she wowed the crowd with a solo during her middle school chorus concert, (Bob held the video camera, since my heaving sobs made for unsteady hands) yet the prospect of openly displaying her beautiful talents definitely took her out of her comfort zone.  All the more reason to swell with pride at her eagerness to audition.

If she had experienced an onslaught of nerves, she hid those feelings well.

We followed our way through the faux movie sets that frame Disney's Hollywood Studios until we saw the sign: "American Idol Experience: Auditions Here".

The friendly staff extolled a warm greeting on my "star-to-be", and since, at age 15, she still held the status of minor, they allowed her "manager" (me) to join her.  While Bob waited in a coffee shop (only one parent allowed), we walked inside, getting one step closer to my daughter's moment in the sun!

We were ushered into a small room, where two women sat behind a desk in preparation to bestow judgement upon my daughter's musical abilities.  Melissa stood facing them, while I sat in a chair behind her.   Not sure how cut throat this competition could be, I feared the judges would cut her off after five seconds with an insincere THANK YOU THAT WILL BE ALL.

Fortunately, the scenario played out quite differently.

The two women, it turned out, were full of smiles.   In an effort to put Melissa at ease, they asked about her interests, school, musical experience, etc.  Then, still smiling, they encouraged her to sing from the heart....which she did, for a full 45 seconds.

During her performance, and as she held onto that final note, the smiles on the faces of the judges grew only wider.  They complimented her and gave her wonderful, solid advice to enhance her abilities, then  even encouraged her to belt out the song one more time.  Again, the two judges spoke with compassion to my daughter, who now, along with me, thought there might be an inkling of a possibility that she would be chosen as one of the elite few to move onto round two.

Alas, 'twas not meant to be.

The judges presented Melissa with an official "I auditioned for The America Idol Experience" button, which she promptly and proudly attached to her backpack.  We both thanked them for their kindness and, just like that, a mere 15 minutes after we had walked in, the audition had ended.

However, instead of feeling deflated, Melissa seemed energized by the entire experience....and so did I.  I felt extremely grateful to those two judges who surely must see hundreds of people each day, yet managed to find it within them to share their kindness and expert advice with a somewhat shy 15-year old who had the courage to give stardom a shot!

We found Bob and transformed back into theme park goers as we made our way to the Toy Story ride.  Yet, for the remainder of our trip, I noticed Melissa laughed with a bit more ease, walked with a slight spring in her step  and yes, actually glowed with pride.

She had done it!  She had auditioned!  And even though she didn't make it, her willingness to share a piece of herself made us so proud.

Our little Princess had become our American Idol!  The Disney magic lives on. 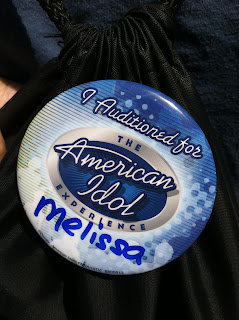 If you like my stories please feel free to share your comments below!
Posted by Lisa Gradess Weinstein at 8:45 PM